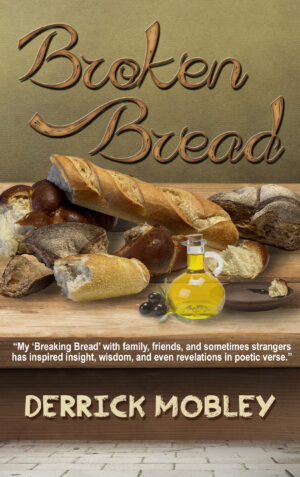 Broken Bread means more than just sharing a meal. The “breaking of bread” has been a tradition used to share intimacy among family and treasured friends. It also has created new alliances, friendships, or the acceptance of travelers from afar. This act has been used to heal old wounds, open new doors and even end wars.

Derrick’s version of breaking bread may mean sharing one another’s burdens or challenges, imparting spiritual insight, comforting a friend in need or all of the above. Derrick has a way of communicating as if he were sitting right in front of you sharing his back story and its inspiration for his spiritual insight of the world around us. He shares his experiences through the style of poetic verse that is known as “Spoken Word”. The spoken word style makes for a personal connection very much needed in our current “technologically based” society.

Be the first to review “Broken Bread” Click here to cancel reply.

Derrick Mobley is an urban storyteller, a poet, musical artist, songwriter, and now, an author. Derrick hails from Central Florida but has influences from around the world. He is a husband, father, beau-père, and PawPaw to his grandchildren. Derrick is a Christian brother and a friend. This is Derrick’s first published book of some of his favorite writings. The hope is that you will find a peice that really moves you. Raised by a widowed mother along with his brother in the projects, Derrick’s writings are a unique blend of street, family, and faith. He has recorded three musical albums: Nails, Nails the Second, and Three Nails. He has also narrated a short film called The Black Burden, produced by local producer Jason Holmes, as well as written, and writing, songs for various local artists. Broken Bread is an attempt to share some things that Derrick thinks that he knows as he has grown to be an old man. In all things, love is the key, and in telling the story, to keep it truthful and real. This I pray!