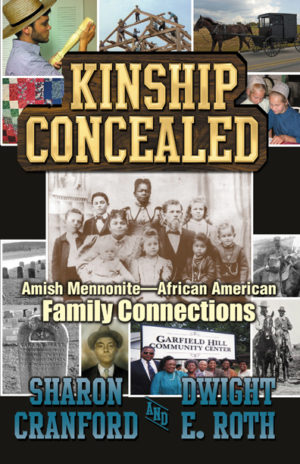 “There are two amazing and unlikely narratives in this book. One is the unusual story of Amish immigrant brothers who take divergent paths to distant worlds. Jacob Mast becomes the leading bishop of the Amish of Berks and Chester Counties, Pennsylvania; his brother John abandons his spiritual community and absorbs the values of the North Carolinian South, including slavery.

These paths do not converge until, generations later, two descendants meet on a Midwestern college campus. And there lies the second amazing story; how the coauthors, one African American and the other Anglo American discovered their common roots while teaching at Hesston College… Cranford and Roth invite the reader to join their journey of exploration and discovery.

There is enough fact to confound and enough mystery to intrigue. They weave together fact and imagination, candor and sympathy, mystery and mysticism into a narrative that begs to be read!”

—John E. Sharp, Hesston college history faculty and author of A School on the Prairie: A Centennial History of Hesston College, 1909-2009.