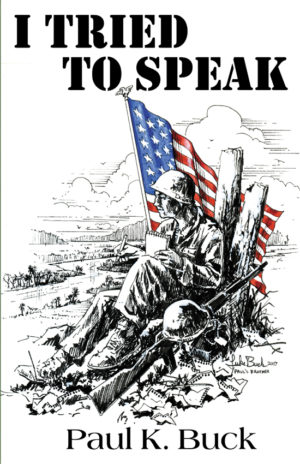 I Tried to Speak

Harold and Alice Buck in Indianapolis, Indiana. He is

the fourth of five children. He graduated from

Indianapolis Tech High School in 1964, and was

drafted into the army in October of 1965. Paul served

out of the army in October 1967. He says that Vietnam

had a lasting effect on him, and many of his poems

are based on things he saw in the war.

Mr. Buck hired on with Trans World Airlines in

October of 1967, and worked for them in Indianapolis,

St. Louis, and later in Orlando, Florida. When

American until his retirement.

Paul met his wife, Linda Toney, on a blind date in

have two sons, Jason and Adam. They also have one

hit him very hard, but he says that he is very grateful

for the 39 great years they had together.

cancer. He says the battle has taken a toll on his

energy level, but he is not about to give up. Mr. Buck

now resides in St. Cloud, Florida where he is a

member of the American Legion Post 80 in St. Cloud,

FL, and is a lifetime member of the Veterans of

also a long time member and on the board of the

Military History Museum in Kissimmee before his

recent health problems kept him from doing his

Be the first to review “I Tried to Speak” Click here to cancel reply.