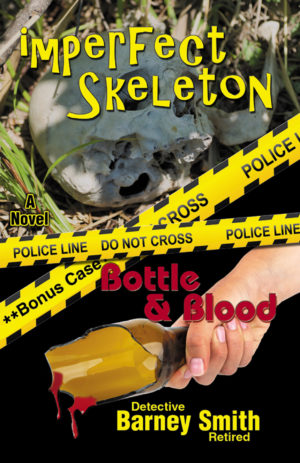 Imperfect Skeleton and Bottle and Blood

ImpeRFEcT Skeleton is the first of the two murder mysteries investigated by Homicide Detective Jake Jacoby and his partner Detective Eddie Rollins. This case involves an Orlando, Florida resident who, through no fault of her own, had her life shortened at middle age though she was rumored to have enjoyed a free and uninhibited lifestyle.

Follow the evidence the homicide investigative team finds, starting from an area under construction in Orlando and then taking them across the country to interrogate possible suspects in the homicide. Due to the author s extensive background, he has provided footnotes that identify uncommon words, phrases and acronyms used amongst investigators and other law enforcement personnel. The storyline shows actual investigative methods used by homicide detectives to solve real crimes.

Factual and circumstantial evidence is utilized by homicide investigators to determine the cause of death, the identity of the victim and, eventually, the identity of the perpetrator. Bottle and Blood is the second murder mystery investigated by Detectives Jacoby and Rollins. Follow the evidence trail with them and discover how money can affect even the best of friends, especially, when well laid plans of instant wealth end, not in money, but murder