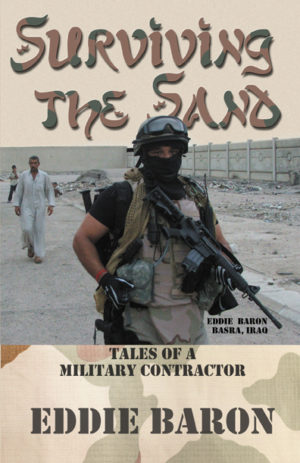 Picture- three armored Suburbans racing through the streets of Basra with 12 Americans serving as International Police Advisors under US State Department Contract in Iraq.  The mission: to assure all American interests are accomplished regarding the Iraq Police, their training, and US Government issued weapons and gear inventory. GPS acquired coordinates being followed on RED Road, one of five different routes designated by color, and chosen for daily travel based on British Intelligence threat levels, as routine as any other day in Basra. The threat levels increased daily on every route.  Every car was an improvised bomb, or IED. Every livestock potentially packed with explosives and set to run in our direction.  Every cell phone user a marked threat. This was the life of a military contractor.

They are known as mercenaries or guns for hire, but the government calls them the “New Army.”  They are a way for the US Government to provide specialized expertise and account for all demands, without using their own resources.  They are volunteers, and expendable anywhere in the world, so that the bodies of young soldiers can’t be exploited by the Media, showing lives wasted and families tormented by loss.  They are sent to places and handle contracts where deploying traditional Armed Forces might be politically, diplomatically or economically risky. I was one of them.

During Iraq in 2005, these men had no rules, and were willing to fight for what was required of them. They did not fall under the Geneva Convention as soldiers, they did not qualify under the Disciplinary Punishment of Courts-Martial under the UCMJ.  Their only true goal was to bring each one another back home, away from those with intent on killing the infidels.

Be the first to review “Surviving the Sand” Click here to cancel reply.