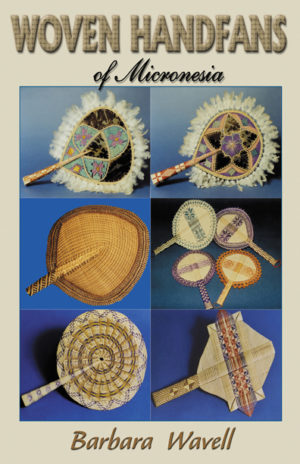 Woven hand fans are an integral part of life in the far flung islands of Micronesia where the use of plant fibers to produce woven products constitutes a major cultural and economic resource. This work documents styles of hand fans from some of the world’s most remote islands including Chuuk, Kiribati, Kosrae, Pohnpei, and the Marshall Islands.  While each island likely had their own unique fan styles, new techniques developed and spread in the historic context of the 20th century where successive occupations by the Germans, Japanese, and Americans influenced the production of woven fans.  Accompanied by over 60 black and white and color illustrations, this work should be a useful guide to anyone who has an interest in the rich and varied creativity of these exotic islands!

Author Barbara Wavell has an extensive collection of Micronesian fans and other crafts.  She has been doing research on Micronesian material culture for over 30 years.  She has an MA in Cultural Anthropology and has written two other books, Arts and Crafts of Micronesia and Painting Palau’s Cultural History: The Life and Works of Folk Artist Charles Gibbons.  She lives in Orlando, Florida with her husband and daughter.

Be the first to review “Woven Handfans of Micronesia” Click here to cancel reply.