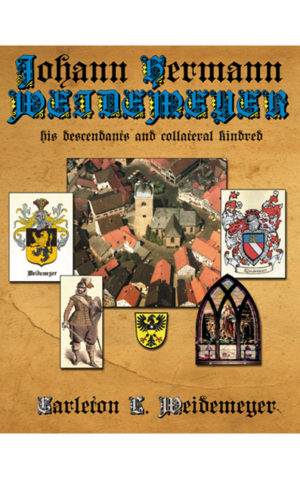 The researcher and author of this book was born in rural Baltimore County, Maryland

to Lloyd and Catherine Greninger Weidemeyer on 12 June 1933. He attended schools in

Baltimore County; obtained his BA degree in Political Science and History from the

Juris Doctorate degree from Stetson University Law School. He is admitted to the practice of

law in Florida and the District of Columbia, Washington D.C.; to the U.S. District Courts in

Florida and D.C., the U.S. Courts of Appeal in New Orleans, Atlanta and D.C. and to the

Supreme Court, and has practiced in each during his legal career.

This research commenced about 1940 when, as a child, he gathered and obtained as

much information as his maternal grandmother could provide. Her encouragement fostered a

John V. Weidemeyer, who served as rural postmasters in Maryland around the turn of the

Having authored numerous books, articles and periodicals on genealogy, law and

entertainment, he often served as lecturer for genealogical seminars and legal courses.

As historian for the Weidemeyer Family Association, he researched and published numerous

articles and biographies for Weidemeyer World Newsletter. Although he was recipient of

numerous awards for civic activities, he is most proud of having been selected Shipmate of

the Year by Annapolis Branch 24 and by the Eastern Division of the Fleet Reserve in 2015.

He was a U.S. Navy Aviator during the Korean War in Squadrons VX4, VW2,

II until it was disestablished in 1966.

Federation for Musicians, he authored a Handbook for Arbitration of Musical and

for his Local. Following retirement, he authored a History of the Musicians’ Association of

In 1962 he married Diane Draper. They have four children: Karen Lea W. Fixler,

Be the first to review “Johann Hermann Weidemeyer: His Descendants and Collateral Kindred” Click here to cancel reply.