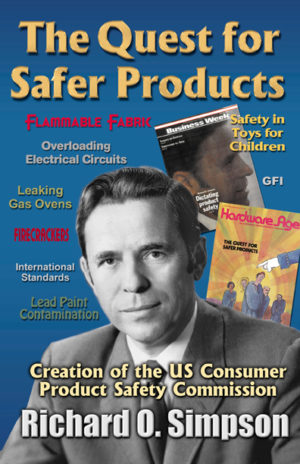 The Quest for Safer Products is an account of Richard O. Simpson, a politically naïve engineer, and how he became the first director of the US Consumer Product Safety Commission. His acceptance of an appointment by Richard Nixon to director came with the stipulation that decisions would be based on factual science and not political party or lobbyists. This biographical account of the agency’s first director shows how it was done during the turbulent 70’s, when trust of government was at an all-time low, much like it is today. The CPSC is an example of what we need today for a government that is not influenced by political parties, lobbyists or by the very businesses they regulate while supposingly serving the American people. Mr. Simpson thanks the media, who helped alert the American people of products the CPSC found to be dangerous to themselves or their children. Credited with over a dozen patents, Mr. Simpson is still serving the interests of Americans today. His latest project utilizes current advancements in technology to protect us from unnecessary home fires and the loss of thousands of children’s lives each year.

Be the first to review “Quest for Safer Products” Click here to cancel reply.