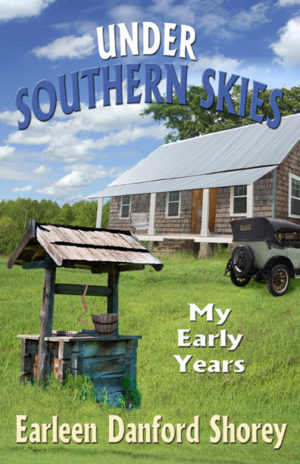 Under Southern Skies: My Early Years

“Many residents of Bolivia were my relatives, and those who were not were very good friends. Growing up in a small town was comfortable and protective; moreover, as a teenager in the 1940’s, it was reassuring. We were surrounded by hard-working people who cared about their neighbors and quality of life; people who strongly believed in God and country.”

Bolivia, North Carolina is nestled amid stately pines, good farm lands, and other magnificent resources. When Earleen Danford Shorey was growing up there, it was expected to become a bustling town, once boasting a railroad built by Russian immigrants, sawmills, general merchandise stores, a shingle manufacturer, public schools, churches, a doctor and dentist, two automobile agencies, a hotel, and a tobacco market.

Growing up in the Danford family, there was never a dull moment for Earleen. School functions took up a lot of her time, and it was always fun to help neighbors with canning and harvesting crops like tobacco. Living close to beaches, ponds, and creeks also provided a great deal of entertainment, and they were ideal locations for oyster roasts and access to other seafood delights.

The Danfords were one of many families who settled in Bolivia several hundred years ago, and Under Southern Skies: My Early Years is the first of two memoirs about several generations of the Danfords during the 1930’s and 1940’s.

Be the first to review “Under Southern Skies: My Early Years” Click here to cancel reply.